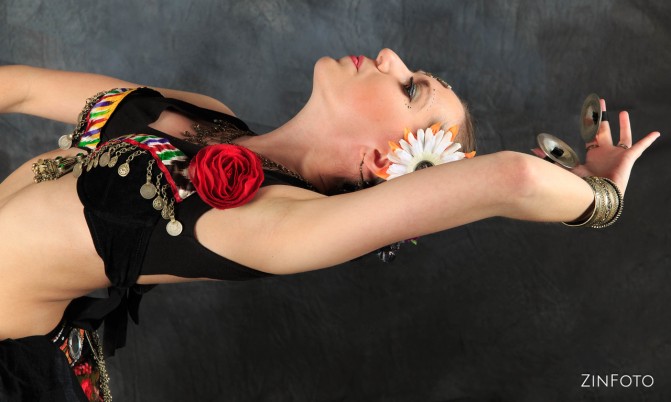 Stephanie was introduced to the world of belly dance by her aunt, Margaret, of Lotus Moon. She soon began dancing under Kalima of Kalima Tribal (Salisbury, NC) in January 2010 where she fell in love with American Tribal Style® (ATS®) belly dance. It became evident to her that this was something she was passionate about and she was soon performing with Damhsa Gasra Tribal Belly Dance.  She performed with them from 2010-2013, earning her ATS® General Skills certificate in 2012. Upon moving to Richmond, Virginia she began training ATS® under the direction of Janine Turner and joined Ajna Tribal in 2014. Stephanie has performed with Ajna Tribal since then across the states, including the honor of being chosen to perform at ATS® Reunion, the International yearly professional conference for American Tribal Style® belly dance in Phoenix, AZ. Stephanie has since studied ATS®, Tribal Fusion, theatrical belly dance, and other forms of Improvisational Tribal Style belly dance under other instructors including Kalima (now Twila Jane Ramblethorn), Megha Gavin, DeAnna Freeman, Carolena Nerricio, Lisa and Terry Allred, Dawn Ruckert, Melody Bustillos, Sami Te, and Suhaila Salimpour to name a few. She is excited to share this language of dance with you!

Missy began her dance journey in Massillon, OH around 2007. In an attempt to get fit, she fell in love with belly dance, and later joined The Raja Groupe, under the direction of Irene Gray. Through her many years in this fusion belly dance troupe, she saw the powerful presence of ATS® dancers. That began a journey which leads us to today!! When Missy moved from Ohio to Virginia in 2014, she sought out classes to learn the style of dance she had been looking and researching fervently. After attending Level 1 classes with an Ajna Tribal instructor, she was asked to join the Level 3/Troupe classes, and was formally entered into the troupe in 2017. Since that time, and under the instruction of Janine, Missy has truly elevated her dance technique and knowledge in this truly unique dance form. Coming from a choreography background, learning improvisation was a challenge for Missy, but she took to it like a fish to water!! She has performed twice at ATS® Reunion, once with Ajna Tribal in 2019, and second as the newest member of Tribal Unicorn in 2020, an international collective of African American ATS® dancers. She is currently teaching classes with Stephanie at Dogtown Dance Theatre, and continues to explore, learn, and educate on the history of belly dance within the African diaspora.